Migrating data from Nozbe to RememberTheMilk

In the past I wrote some helper tools for Nozbe, but today I am telling this service good bye. Short explanation why can be found below, but mainly I publish this article to describe how I moved my projects and actions from Nozbe to RememberTheMilk.

My 2-yearly prepayed period ends in a few days and I had to ask myself whether I want to continue paying for Nozbe. Unfortunately - no.

First reason is the price. Nozbe seems simply too expensive, especially considering a few competing projects are free (let me name Google Tasks and HiveMinder for example, and of course RememberTheMilk). Note also that Nozbe price increased by about 40% comparing to my previous plan (no longer available). I don't refuse to pay, I plan to pay for RememberTheMilk if I stay there, but Nozbe wants too much. In my humble opinion.

Still, the main reason is that Nozbe is not suitable for me anymore. I don't need to be introduced to GTD and led by its main routines anymore, so the main Nozbe advantage is gone. I face restrictions more and more often, but the worst problem is that Nozbe does not scale to over 50 projects and hundreds of actions I saved over those two years. The main page needs at least a few seconds to open, lack of sorting is not a nuisance anymore but horrible omission, and I need to scroll and scroll and scroll. 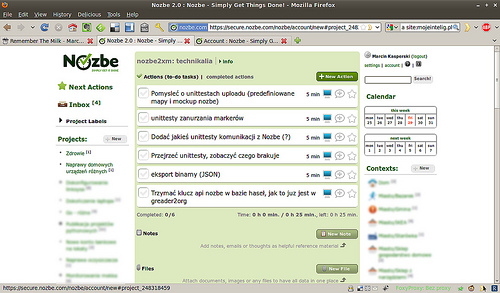 Does not seem troublesome? See the true picture: 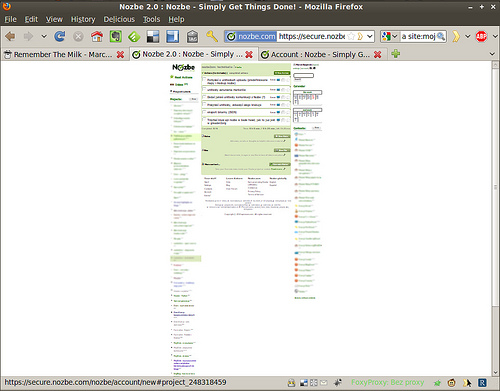 The new interface has more problems. Simplest edit require a few doubleclicks, bigger reorganizations are so painful I don't want to do them anymore, old-style screens opening from time to time make a very chaotic impression. And the new API is still not documented. Michał Śliwiński is working hard on marketing but his product seems to be left forgotten.

Still, not everything is sad here. I don't regret my time with Nozbe, I still think it is a good tool for somebody who wants to learn GTD and start working on time organisation. But I am not here anymore.

I considered Google Tasks, RememberTheMilk, HiveMinder and ... org-mode (likely over Dropbox) - I don't want to enter another expensive service straight away without at least trying a free one.

RememberTheMilk seems most flexible. While I will need to put some effort into inventing my usage paths, plenty of possibilities to augment the system are there and I feel I am to need them. Plugins for Gnome Do and Tasque will also be helpful.

I scripted the data migration. Details are inside mekk.rtmimport docs so I won't retype everything here, but in short, there are two steps:

Install or update mekk.nozbe (version 0.4.2 or newer is needed):

(note that virtualenv can be used here) and export the data to .json:

(--completed exports also completed actions, those are not needed for import but can be saved as a historical note).

First install RtmAPI. I hope maintainer to accept my patches, but as long as 0.3.2 is the newest version, my fork is needed. Grab rtmapi.zip, unpack and install by:

Try dry-run (which does not save anything) to make sure nothing crashes and things seem correct:

The import can last some time (my hundreds of actions were importing for half an hour).

Note: imported data (especially new lists) are not visibile in the web interface until you logout and login back. You can do it a few times during import.

And here is the final result: 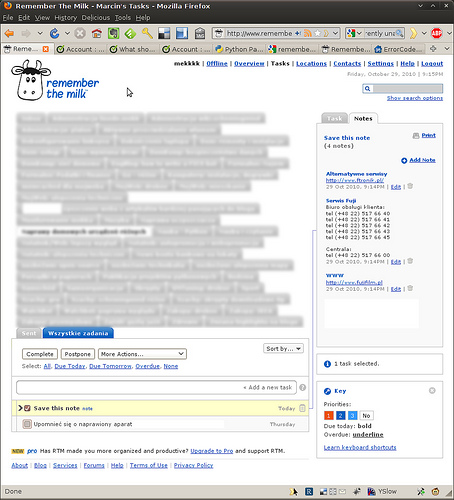 Imported notes visible on the right.


« Calibre scripts updated to handle Calibre 0.7.* and refactored for more natural installation | Yet another Python client for RememberTheMilk »
blog comments powered by Disqus